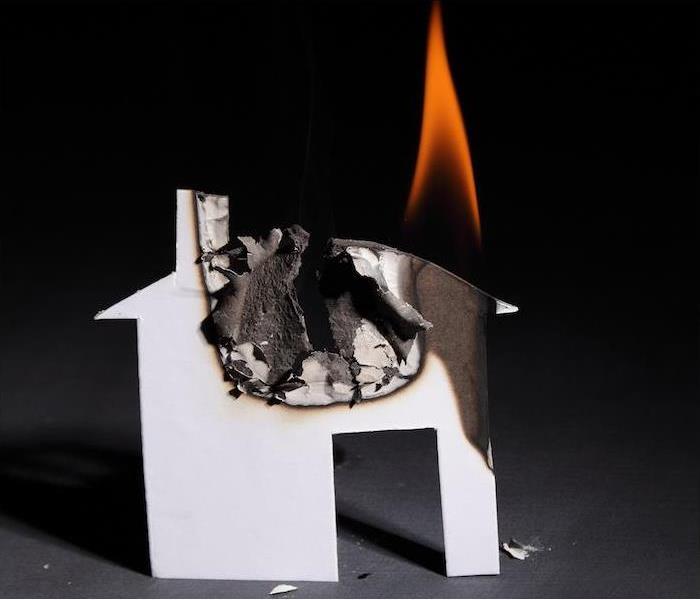 If your home or business has any damage, SERVPRO of North Kenosha County is ready around the clock to help you recover.

Imagine a three-dimensional triangle. If it has a square base, you’ve got yourself a pyramid. But if it has a triangular base, you’re thinking of a tetrahedron. Forgive the geometry lesson, but we’re going somewhere.

Fire agencies and scientists use the fire tetrahedron to visually depict the four essential elements of every fire.

Fuel. If a fire happens in the forest, but there’s nothing for it to burn, well then it can’t happen—it won’t happen. A fire can’t start without a combustible material to devour.

Heat. If the combustible material doesn’t reach a certain temperature threshold, it won’t ignite. This is why a sudden burst of flame from, say, a gas grill, may not necessarily ignite other things around it.

Oxygen. In the same way a fire can’t start with no fuel source, it couldn’t start in a vacuum. Oxygen feeds the hungry flames and allows the fire to continue.

Chemical Chain Reaction. All three of the previous elements have to keep happening, and the oxygen in particular is necessary for the chain reaction, which perpetuates the churning and expansion of the fire.

Cool it. We say fire, you say water—it’s that engrained in us. The most common way to fight a fire is by dousing it with water, but it’s more about temperature than substance. Water is the quickest accessible way to cool the burning material and restore a thermal balance—that is, a temperature at which the rate of cooling is greater than the rate of rising heat.

Smother it. Most fire extinguishers accomplish the task of smothering a fire by depriving it of access to the oxygen in the atmosphere. This is also how “stop, drop and roll” works—it’s not just a thing to make you look silly while you’re also on fire.

Starve it. This happens when there’s nothing left for a fire to consume, either because it’s totally obliterated whatever it was feasting on, or because surrounding fuel sources get removed before they can combust.

Interrupt the chain reaction. This one’s a little more intensely scientific, but certain chemical agents, such as halon, can be introduced into the atmosphere surrounding a fire, and they can actually interact with the oxygen and break up the chan reaction that keeps a fire going. Halon is actually great at this, but its production has been halted because it has a negative impact on the ozone layer.

If the fire tetrahedron makes a wreck of your home or business, we’re ready around the clock to help you recover. Contact SERVPRO anytime for fast, thorough cleanup and recovery after a fire.